“Go and make disciples of all nations…” 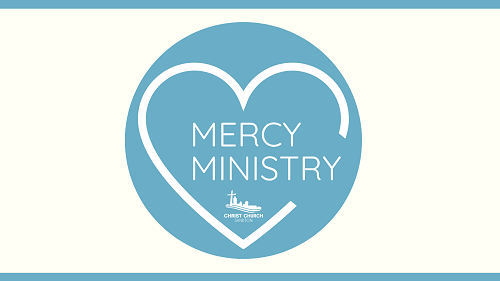 The aim of the CCS Mercy Ministry is to show mercy to those in need, and along with practical assistance, we will endeavour to lead people to, and grow people in, Christ as well as enabling them to help themselves. This can be viewed as internal missions.

All communities are struggling at this time. Attention will first be directed to the CCS Family and thereafter to other organisations or individuals.

The Ministry is overseen by a three people team, carefully working together: Greg O’Connor, Phila Phungula and Herman Botes. Rest assured that the funds received will be used wisely.

What can you do?

Many of us are not using our vehicles as much during this Lockdown period. If you have funds previously allocated to petrol, then using this money may be an opportunity for you.

Each of you should give what you have decided in your heart to give, not reluctantly or under compulsion, for God loves a cheerful giver.
2 Corinthians 9:7

They are serving with AIM (Africa Inland Mission) among the Ndau in Central Mozambique and are working to see Christ-centred Churches among all African people. What a great missions focus!

Jinx, Dawn and their team are focused on church planting, as well as the training of future church leaders.  They realise that they are foreigners in the Ndau culture and that they will always be different.  Although they study the Ndau people’s language, culture and traditions, they will not know them better than the people making up this mission field do.  So, by coming alongside those leaders the Lord raises (Church, Youth and Sunday School leaders), Jinx and Dawn are teaching, discipling, encouraging, mentoring and training each individual with the emphasis on them doing the work to reach their own people.

In 2013, two of the leaders, Joachim and Matteus, were consecrated as evangelists. In April 2018 both were ordained as full ministers. To date, they have beein going out evangelising in rural areas as well as planting new churches – 14 already!

Aside from other ministries, the team teaches at a rural Bible School for a week every month (except during the planting season, as the Ndau are subsistence farmers). 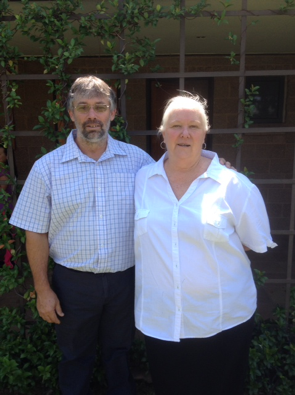 This school has been in existence since 2003 and currently has thirty-five literacy students who are mainly woman whom Dawn teaches to read and write in Ndau. Most have never been to school at all and are now able to read their own Bibles. A big contributing factor was the many years of civil war, however an overbearing cultural inequality between men and women has affected the woman greatly. The average level of education for the men is around Grade 5. This group is taught by Jinx and is a class of about 25 students.

Jinx and Dawn would appreciate your prayers for:

Should you be interested in donating to support this vital ministry, please email Louise de Ronde at finance.za@aimint.org. And if you are associated with Christ Church Sandton, please let Tom Robson know that you are participating in this way.

Greg, Yvonne, Caleb, Benaiah and Galilea Cameron are serving the Lord Jesus Christ in their missions work in the rural areas of southern Paraguay, South America. They are involved in personal evangelism through community work and volunteer teaching in the local schools, youth and camp ministry, Bible studies and visitation ministry. They are also managing some administration tasks for SIM Paraguay, conference planning, personnel coordination, mentoring and facilitation for short term missionaries.

They thank God for the privilege of serving Him on a team that strives to bring His Good News into places where it is least known. 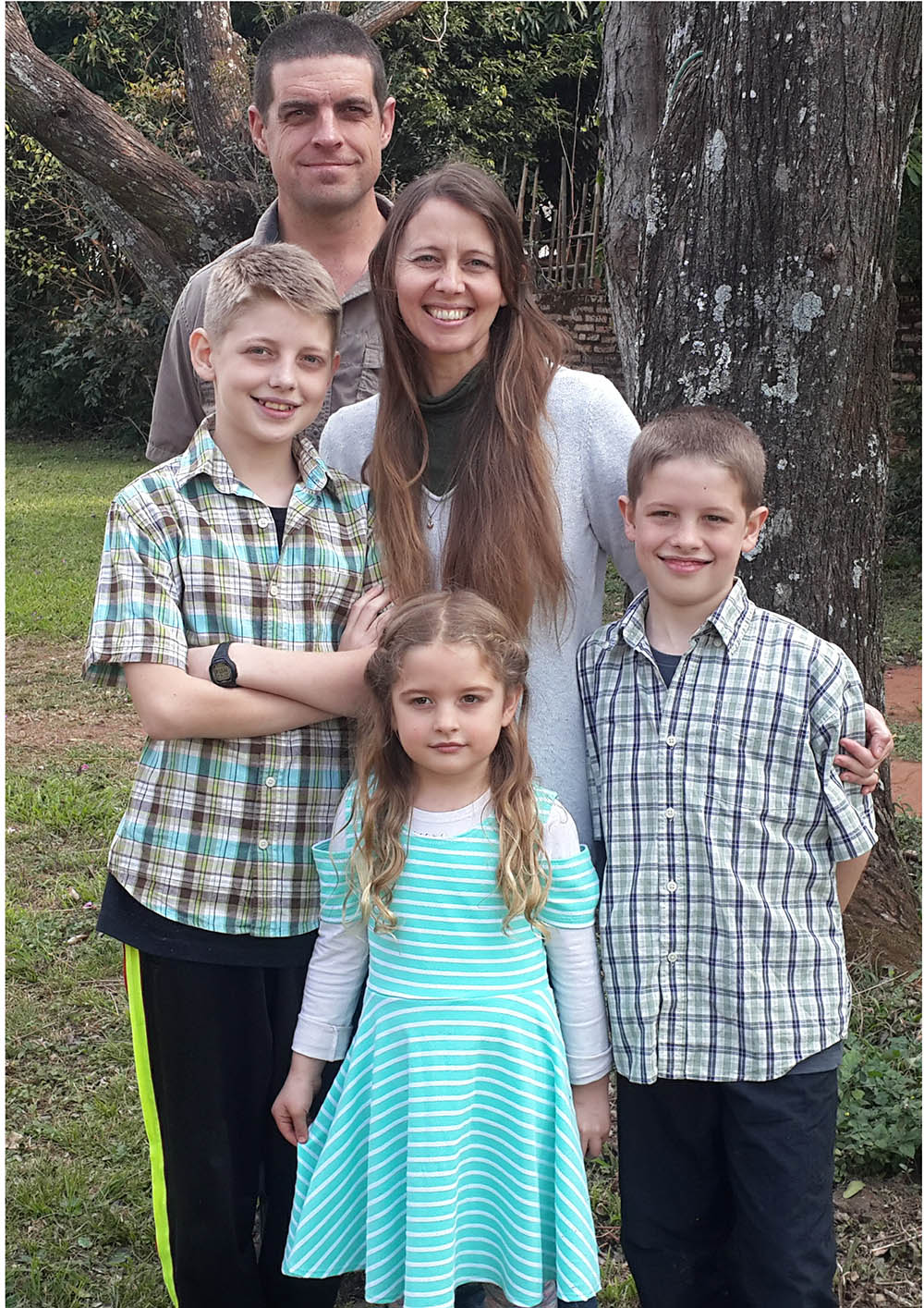 This Godly couple have been missionaries for many years. Until their retirement in 2017, they served in Southern Sudan with African Inland Mission.

They are now in Botswana where they are enjoying living near their family. Pat and Geoff do itinerant missions ministry locally, as well as in Namibia where they used to work 14 years ago.

They are still in contact with many of the AIM missionaries in SSD, where the conflict continues to drag on with little promise of a solution or peace. Wildcat strikes on the roads continue to plague movement. Hunger & desperation are rampant. Please pray for that those nations with influence & power to bring change.

Currently Geoff and Pat minister to the staff at a nearby lodge and are greatly encouraged by this work. The staff come from a variety of churches, some with poor teaching. 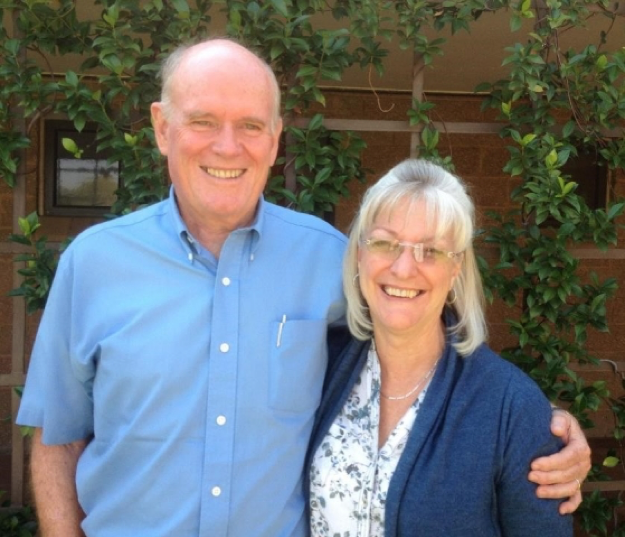 They seem to be like hungry birds with their mouths open each time, eagerly taking in what the Hartleys feed them from the Bible.

There is a sense of tremendous responsibility before God of what they are teaching – may God continue to guide and feed them so that they, in turn, can take that to hungry souls. They are building up their relationship with the staff group and are getting ready to grow into the counselling side of this pastoral ministry. Pat notes that they are very aware that with this new people group (to them) they need to earn the right to speak into their lives. Pray for Geoff and Pat to be sensitive and alert to their needs in this vital missions work.

Brian met many members of the congregation when he facilitated the Kairos course earlier in 2014 and again when he preached in 2017.  He calls himself a Christian Missionary to Muslims and uses the verse from 1 Corinthians 9:14 as inspiration for the missions work he does “In the same way, the Lord has commanded that those who preach the Gospel should receive their living from the Gospel.”

Miss F (not her real name) is from the UK and was at CCS from 2008-2011. She was accepted by the missions agency, People International, to join a city-based team in Central Asia from mid 2015 for long-term service. The majority of the people there follow Islam, with much emphasis on holy places, talismans and shamans.  Religious activity is closely monitored by the Government, hence the non-disclosure of her name.

Initially Miss F entered the country as a student doing language study and stayed with a local Muslim family to learn the culture. Afterwards, she used her water engineering skills by working for a Christian NGO as a volunteer, while sharing the Gospel and encouraging/training believers. She was there for five years.

Currently, however, Miss F has been in the UK since the Covid-19 lockdown began. She originally expected to return to Central Asia, but is still in the UK, and expects to be for some time.

The mission to Mozambique is carried out each year, though participation by members of Christ Church Sandton has only occurred twice to date.